Nara Park is a majestic, tree-lined historical park in a vast area of 660 hectares, including the continuation of the Todai-ji Temple, Kofuku-ji Temple, etc. It is historical park that has a large scale. The most famous is the deer group of Kasuga Taisha, which is regarded as the messenger of God and is taken care of by people. In addition, there are about 1,700 different species of cherry trees in the park. The deer who played in the park in groups were protected by the legend of the white deer that was circulated by Kasuga Taisha and were designated as the country’s nature-protected animals. It is best to enjoy this beautiful nature in the seasons of parade and graduation in the April and May, or the autumn that filled with red leaf. However, during the off-season, you can take a leisurely walk here. At any time of the year, there is an attractive landscape. 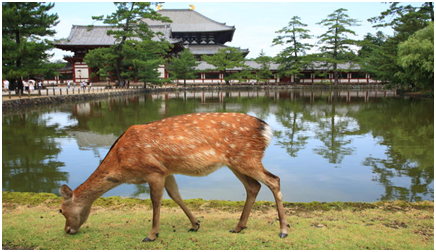 In July 2018, the Nara Deer Conservation Association counted the number of deer in Nara Park and Wakasayama. The results show that there are 1360 deer in Nara Park, which has reached the highest value since the survey began in 1955. The increase in deer is mainly due to the fact that patrol cars have begun to protect their living environment, and the number of deer dead due to illness and traffic accidents is gradually decreasing.

Japan is a place that filled with quietness, we hope this passage can help you when you travel in Japan.