On October 31, Xiamen, Fujian Province, China, Asia’s largest crocodile nickname as “Xiaohe” was hit by a stone by a family tour group, causing head bleeding. The diameter of the stone reached 17 cm. The witnesses said that the stone thrower saw the “Xiao He” moving and then took pictures with laughing. After the stone thrower found the bleeding of crocodile then hurried away as avoiding to be caught by Zoo Keeper. 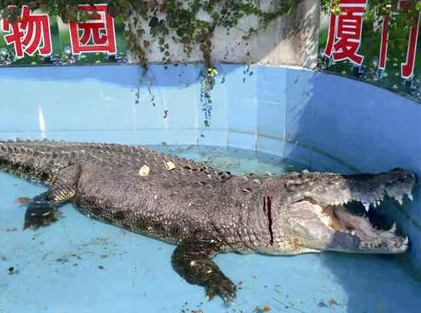 It is known that the tourists often tease crocodiles with small stones and sticks in order to satisfy their curiosity. The head and claws of the “Xiao He” have wounds. A little child asked the adults at the scene: “does it not hurt?” Now the weather is getting cooler and the healing of crocodile wounds is slower. Although it has been treated and nursed urgently, the healing of crocodile wounds still needs not less than ten days. The zoo has been watching closely for 24 hours to the “Xiao He”, and at the same time has called the police to find the tourists who they are perpetrator.

Tourists threw stones at crocodiles in the zoo on October 31, just to verify whether they were real or false, according to the director of Sino and Africa ShiYe Wildlife Park in Xiamen City, China. The crocodile bled because it was smashed to the head by the stone with 17cm.