The boom type crane can carry heavy objects to a place far away from the machine base through the extended long arm frame, which is suitable for loading and unloading operations of vehicles and ships. The boom has both tiltable and non-pitchable horizontal styles. The spreader of the tilting boom crane is suspended below the top pulley of the boom, and the boom of the horizontal boom crane has a lifting trolley with a spreader. The jib crane can generally be swiveled, bridge crane and the weight can be moved within a certain range by the rotation of the crane and the pitch of the jib or the movement of the jib along the jib. The lifting capacity of this type of crane is expressed in terms of the rated lifting capacity and the rated lifting torque at the minimum of the boom. The amplitude is the horizontal distance of the spreader from the centerline of the crane’s rotation. The lifting torque is the product of the gravity and amplitude of the lifting object.

The bridge type crane has a horizontal bridge that can lift heavy objects over the ground obstacles or complete certain process operations. It is widely used in workshops and indoor and outdoor warehouses in the fields of machinery manufacturing and metallurgy. Bridge cranes run on elevated tracks and other bridge cranes run on ground tracks. The lifting trolley runs along the track on the bridge. A rectangular (sometimes annular) working range is obtained by the movement of the bridge and the lifting trolley. The main parameters characterizing such cranes are the rated lifting capacity and span (the distance between the two rail centerlines of the crane running track). 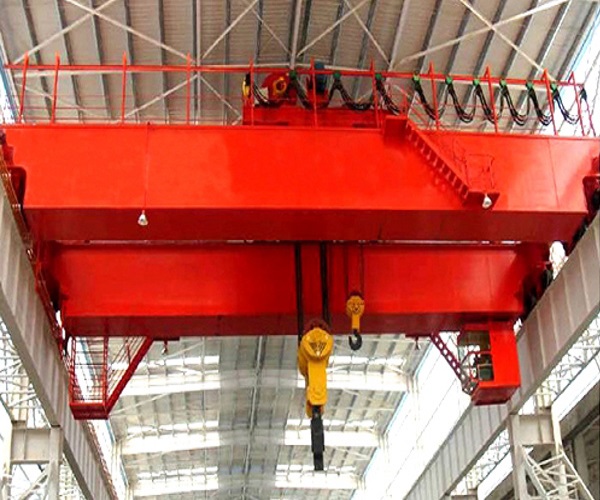 There are many types of cranes, but the main components include hoisting mechanisms, operating mechanisms, luffing mechanisms and slewing mechanisms, as well as metal structures. Some cranes also have special working devices that perform certain process operations, such as clamps for clamp cranes.

1 Lifting mechanism: The most basic working mechanism of the crane, mostly consists of the hanging system and the winch, and also lifts heavy objects through the hydraulic system. Hanging systems generally consist of wire ropes, pulley blocks (see lifting tackles) and spreaders, and hooks are the most common spreaders. The winch can be placed on the lifting trolley or on the foundation on or near the metal structure of the crane. The weight can be lifted and lowered by retracting the wire rope. Sometimes the electric hoist or manual hoist can be used as the hoisting mechanism. Some cranes are also equipped with a secondary hoisting mechanism for lifting lighter items or assisting operations.

2 Operating mechanism: used to horizontally move heavy objects or adjust the working position of the crane, generally consisting of electric motor, reducer, brake and wheel. In modern cranes, the wheels on both sides are usually driven by separate drive mechanisms, or a “three-in-one” method in which the motor, reducer and brake are combined. The composition of the lifting trolley operating mechanism is similar to that of the crane operating mechanism for horizontally moving heavy objects or adjusting the trolley position. Most trolleys are self-propelled, that is, they are equipped with a drive unit; sometimes, in order to reduce the weight of the trolley, the wire rope can be used, that is, the drive mechanism is mounted at one end of the horizontal boom or the bridge.

5 Metal structure: It is the skeleton of the crane. Various cranes have different structural types. The main carriers such as the bridge, the boom and the gantry may be a box structure or a truss structure, or may be a web structure. Some available profiles are used as support beams. The size and weight of the metal structure account for a large portion of the crane’s overall dimensions and total weight. The structural weight should be minimized under the conditions of ensuring strength, stability and rigidity, that is, ensuring that the metal structure is not damaged, excessive deformation and vibration are generated.

The basic parameters of the crane mainly include rated lifting capacity, maximum amplitude, maximum lifting height and working speed. These parameters are an important basis for specifying the hoisting technology solution.