In recent years, the scale of coastal ports has been continuously expanded, and port cranes have developed rapidly. They are characterized by advanced technology, large-scale equipment, high cost, high speed and high efficiency. Due to the high winds and the changing weather in the coastal areas, the wind protection problem of large machinery is becoming more and more important. Every summer and autumn, it is a period of tropical storms, strong tropical storms and typhoons. Not only that, but sudden gusts of wind will also occur at sea, and frequent damage to large hoisting machinery in the port will occur. Due to the continuous development of marine vessels, the port cranes are also developing in a large-scale direction. Therefore, the wind protection problem of large cranes is particularly important. Let’s explore this issue below.container crane manufacturers 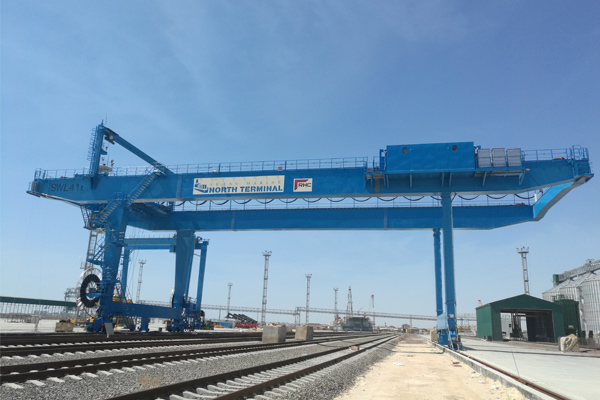 2 The working principle and function characteristics of hydraulic wheel brake

First, we introduce the principle of the wheel brakes, when the mechanism decelerates to stop. By applying a sufficient braking torque to the wheel, the rolling resistance of the wheel increases under the action of the wind (until the wheel slips). Thereby, rolling friction (static or dynamic) resistance or sliding frictional resistance (sliding frictional resistance when the wheel is slipped) opposite to the wind force is generated, and the wind resistance is achieved. When the mechanism is to start (drive), the wheel brake is controlled by PLC (or other means) to drive release (opening) in advance, so that the brake pad of the brake is released from the wheel brake cover and the braking torque is eliminated. Wheel brakes are generally only used for the braking of passive wheels of a large vehicle operating mechanism. WB series pinwheels have the advantages of compact structure, complete functions and low maintenance, but they must be used with hydraulic systems. The precision centering adjustment mechanism can adjust the elasticity of the micro-gap errors on both sides without the need of two-side adjustment, and avoids the danger that the internal mechanism is easy to generate internal stress due to improper adjustment. The mechanism can also ensure that the gaps on both sides are equal.

Automatic compensation function – no adjustment, accurate and reliable. The compensation mechanism is located at the end of the piston and the adjustment rod is located inside the piston and is extremely compact. Due to the lever ratio of the pinch wheel from the piston to the brake shoe, the piston stroke is more sensitive to the wear of the friction plate, even a small amount of wear can result in more piston release strokes and more braking force. If it cannot be adjusted in time, it is prone to potential danger. Therefore, it is more important to ensure the stroke of the piston. The compensation mechanism is very sensitive and reliable, reducing the trouble of frequent maintenance adjustments, and also eliminates this hidden danger in a certain sense.

Powder metallurgy friction sheet – more wear-resistant and long lasting. Gap Limit Switch – Based on the understanding of a stable release gap, an optional gap limit switch has been added. Monitor the change in the clearance. Once the scope of the permit is exceeded, an alarm is issued to facilitate timely adjustment and increase wind protection.jib crane hoist

3 Precautions for windproof operation of large cranes at seaport terminals