Cynops orientalis live in mountainous areas with altitudes of 30-1000m.Click Home  They often live in muddy swamps, still ponds, spring pools, paddy fields and ditches near them. On June 7, 1974, more than 1,600 of Cynops orientalis were found in terraces of fields in Anhui Province, China. The inner side walls of terraces were made of stones. Stone gaps became a good hiding place for the Cynops orientalis. Cynops orientalis in Zhejiang Province, China do not have a strict winter dormancy. So it can be seen throughout the year, the migration season is most visible in 4 and May. In the daytime, they often hide under water or under water grass. Sometimes Cynops orientalis breathe out of the water. After winter, it is hidden in the bottom of the water or in the wet soil cave, between the stones or under the roots. When the water of pond dries up or is with thin ice, the overwintering individuals often float during the water grasses or hide under rocks, or even move forward to continental rocks. 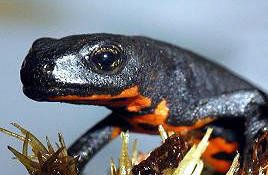 The courtship behavior of Cynops orientalis (Oriental Dragon)Click Home is that males often swim around females, sometimes touching female anus; sometimes swimming in front of their heads; bending their heads, staring females; and bending their tails forward and shaking rapidly. This action can be repeated many times, sometimes lasting several hours.